Sousuke, Komaki’s grandson, is training Kiryu in the legendary Komaki style. He’s cheeky and strong but in his battles and training with Kiryu he will hone his temper and learn honour in battle. Tendo is an old hermit that lives in the shrine in the mountains and will use his power of the gods to train Saejima. He can manipulate nature to throw fireballs and summon avalanches. Daijiro Saigo after training Akiyama in the past he returned to the middle east to hone his military skills. His special form of training is with weapons especially guns and grenades in battle and chase training! 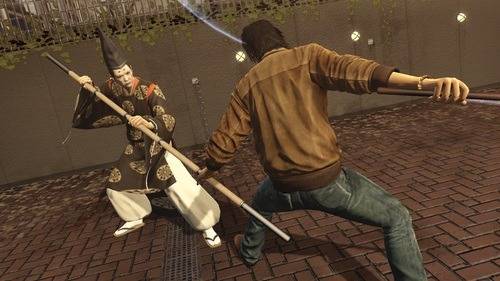 Leo Ayanokoji will be training Shinada, in his hands anything can be used to fight regardless of its form. He wishes to impart this wisdom to Shinada. Tatsuya is a celebrity TV chef that appears on a wide range of cooking shows. He is opening a new restaurant and wants to fill it with the best flavours from across Japan. He will meet each character in their own cities during the game and you can help him find the perfect dishes. Doctor Minamida returns with his amazing Inner Fighter 8 Load Battle (IF8R) machine! He is currently testing his machine in cities around Japan to gather more player data. The device has been reduced to a portable version which is just a helmet. This time IF8R is a side-scrolling action game that will allow a player to fight through several levels. Doing so will allow you to learn new techniques and increase your heat gauge!